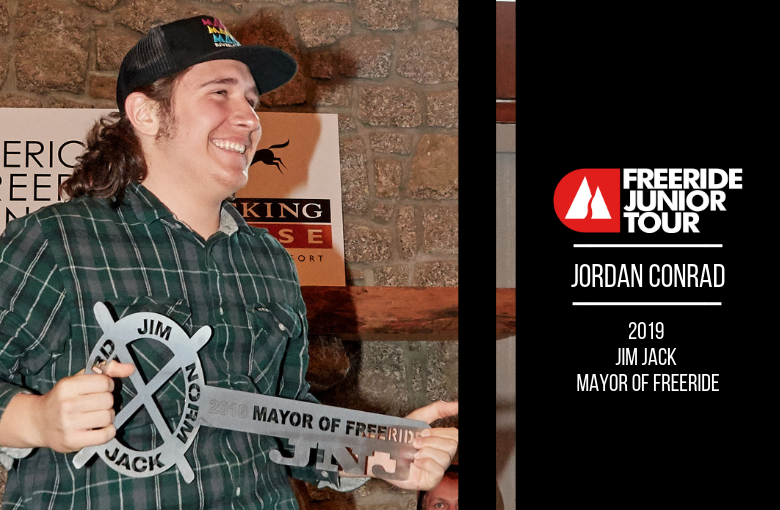 The IFSA Introduces the new 2019 Jim Jack Mayor of Freeride...

The IFSA Freeride community nominated Jordan thanks to his:

The votes in our 2019 Mayor of Freeride election highlighted Jordan's winning attitude, his ability to always remain positive, and the countless hours he spends watching over the Mad River Glen Freeskiing Team's youngest U12 riders. Jordan always puts his teammates' needs above his own and strives to be a good friend. His infectious smile and friendship is valued and appreciated by many in our Freeride community. Jordan has set a fantastic example for which all Freeriders should strive. Some feedback about Jordan:

"Jordan - He’s not boosting his Instagram followers or hunting down sponsors, he’s boosting his teammates and skis because he loves it. His effort and smile, totally genuine."
- Jeff Gladchun

“Jordan is always positive and encouraging of his peers. He was a Flyin’ Ryan award recipient last year and deservedly so. Even under pressure or when things don't go perfectly in his run he remains kind and stoked to ski.”
- Hanna Holcomb

“Jordan is always positive and always supportive of his teammates and other competitors. When my son was smaller, Jordan would take him and his pals skiing in the trees at MRG and made sure they got down ok. If my kids grow up w/ half the spirit and character of Jordan, I will be a happy man.”
- Jason Kottke

“Jordan has the best attitude of any young man I know. He is friendly to everyone and loves to ski for all the right reasons. He truly exemplifies the spirit of Freeride.”
-Joy Schiffmann

The IFSA asked our new mayor a few questions.

- What does it mean to you to serve as the Mayor of Freeride?
Being the mayor of Freeride means to always be supportive of everyone you ride with. Have fun and stay safe. Push yourself comfortably.

- What do you enjoy most about participating in the Freeride community?
I love the Freeride community. It’s competitive but everyone is really looking to have a good time on the mountain. I’ve met so many good people I and have had countless days of excitement. It’s a big family. Every week is a new adventure.

- What are your summer plans?
My football team (Newtown High School, CT) starts training in the summer, and I am just finishing up my rugby season (Aspetuck Valley Rugby, CT). I usually spend at least a couple weeks at GMTC camp (Green Mountain Training Center, Williston, VT) practicing on the trampolines and parkour equipment.

- What are your goals for next season?
I just want to improve my technique and style on the slopes to help myself and my teammates become the best skiers they can be -- but I also want to do well enough to earn an invitation to championships again! 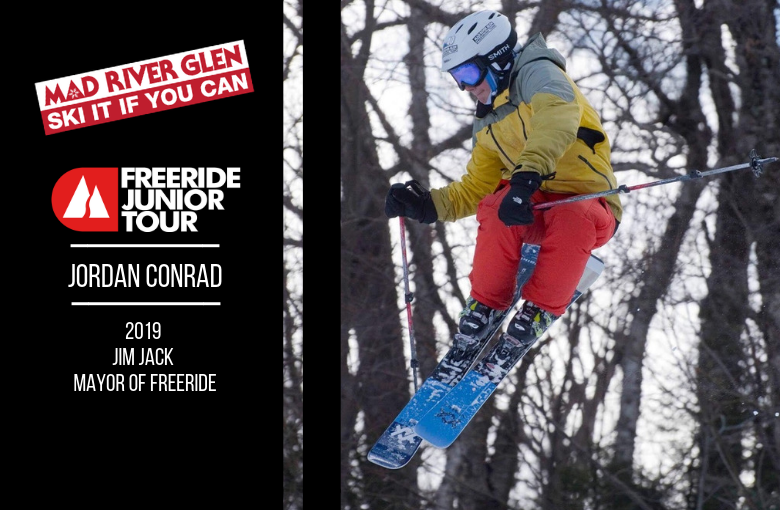 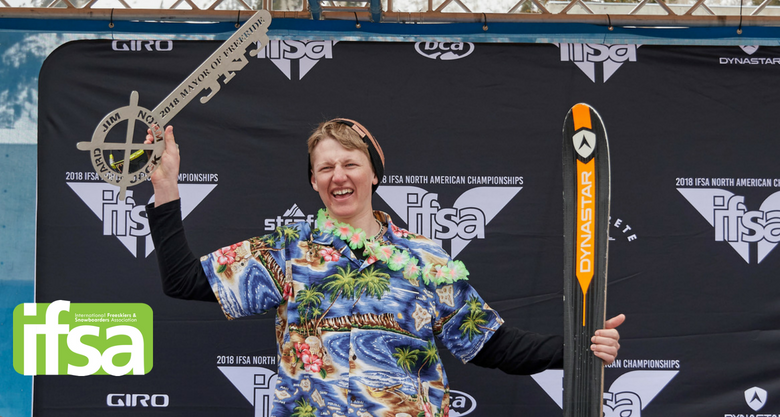 The 2018 Jim Jack Mayor of Freeride was Winter Park skier, Cole Wettersten. Looking back at Cole's amazing time as an IFSA Junior, we are struck by what a fantastic attitude Cole shared with our entire community. As you can tell by his podium outfit, Cole tends not to take things too seriously. His fun spirit and kindness helped him to spread an infectious love of Freeride to riders far and wide.

The 2018 Mayor of Freeride election saw a record-breaking 213 votes and a huge chuck of those votes highlighted Cole's amazing spirit of sportsmanship and touted the fantastic example he set for younger riders and fellow teammates. We are thrilled that Cole is here to represent our sport in such a positive light. We can't list all the wonderful things our community said about Cole, but here are a few standout quotes from our community.

"Cole is a great role model for the younger kids. He skied with them and coaches them all while keeping them safe. He always has a smile on his face."
- John Monkouski

"He is the definition of Freeride as a person. He has the most love for the sport I have ever seen. You’ll know that he deserves to be the Mayor of Freeride the moment you meet him."
-Casey Myers

"Cole has the true Freeride spirit! He lets it fly and is free when on the mountain. Cole is also an excellent role model and mentor. He made friends with my son when they first met at SASS Argentina 2 years ago. Cole will represent IFSA and all that it stands for."
- Nancy Haack

The IFSA would like to congratulate Cole and thank him for bringing such immense positivity and good vibes to our sport. We all look up to Cole as an example of what a Freerider should be.

The 2017 Jim Jack Mayor of Freeride was SquawFree skier, Mia Winans! Looking back at Mia's amazing time as an IFSA Junior, we are struck by what a charismatic, kind, and humble athlete Mia has become. Keep reading to learn a little bit more about Mia and Jim Jack Mayors of the storied past.

A word from Mia:

"I've always been infatuated with different art forms, but I was never any good at painting and I couldn't strum a guitar. Freeride skiing allows me to use my creativity and make something out of the skills I do have.

After six years of competing in the IFSA Junior Series, I have developed such a deep love for the sport and all of the obstacles, laughs, and people that come with it. When I heard my name being called for the Mayor of Freeride, I got goosebumps! I've worked very hard to progress the sport for women and support all the skiers out there. Being recognized for this is an amazing feeling! Thanks to everyone that made this happen. I've got so much love for the freeride community that has made me who I am."
----Mia Winans 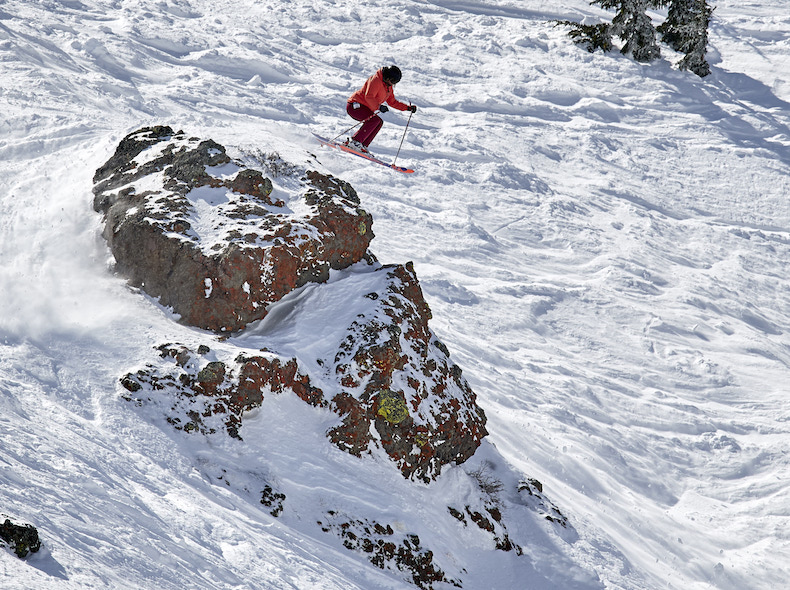 A word from Mia's coach:

"Mia came to SquawFree at age 8 with the all the qualities of a champion. She has a competitive hunger that has her always pushing her limits and progressing herself both as a skier and a person. She carries herself in the same way off the snow. Balancing her focused competitive edge with her fun-loving zeal and passion for the sport, she is highly regarded by her peers and is a perfect choice for the Mayor of Freeride."
----Jason Dobbs, Head Coach of SquawFree

COMMEMORATING MAYORS of the PAST

Since 2013, The IFSA has recognized one stand out individual who perfectly exemplifies the spirit of Freeride. This is to honor the legend of IFSA Head Judge and President, Jim Jack, who was lost to us in a tragic avalanche in the Tunnel Creek area of Steven's Pass, Washington. To honor Jim Jack's legacy and enormous contribution to Freeride, the community submits votes each year to elect a Mayor of Freeride. This is a special IFSA tradition to honor the things we love most about freeride.